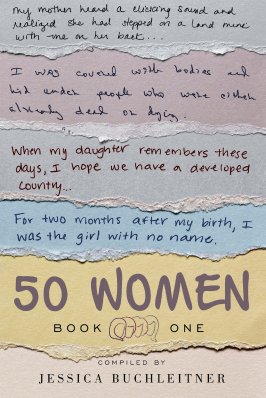 Many of their stories challenge common stereotypes and provide living historical accounts of the densely complicated political and societal issues of our time, including:
•    Armed conflict in Afghanistan, Vietnam, Burma, South Caucasus, the Balkans and Israel and Palestine
•    The Arab Spring Revolution
•    The plight of internally displaced persons (IDPs) in Thailand
•    Cambodia and the Khmer Rouge
•    The collapse of the former Soviet Union
•    Dictatorship in Argentina
•    Genocide in the Democratic Republic of Congo
•    Wage discrimination
•    Labor trafficking
•    Female Genital Mutilation (FGM)
•    Domestic, sexual and gender-based violence

At this point in history, women’s rights are a serious global issue. This is largely due to the realization that most developing countries at the bottom of the economic ladder fail to recognize fundamental human rights for women, to encourage female empowerment, political participation or to provide equal access to education and maternal healthcare. Women’s rights are a core focus of United Nations programs where a growing number of member states are actively seeking to improve conditions for women and girls through various policy initiatives.

The 50 Women anthology series is geographically divided as:

Both books have received the Jaquis Award  from Legendary Women alongside Gloria Steinem and Nobel prize-winning author Toni Morrison.